[ edit: interesting; it seems that jpg handles gradients much nicer than png ] well hello hello… welcome once again to this tri-weekly dose of humour i like to call “3 finger salute” if any of you caught the title, you might notice that as of november 8 2001, 3fs has been officially online for […]

#154: the plot thickens once more yet again

yeah, so i was drunk for the last update. sue me… well, don’t. yeah. i drank me an awful lot of alcohol.. as usual, it wasn’t condusive to typing. i’d just like to apologize for friday in general- please remember that i was actually passing out at my keyboard while typing… first things first- a […]

ummm eah i have no clue what toda’y comic is about i think it has soemthing to do with teh forums… let’s ee iof i can find the original forum remark to post in IRC log gumou… of course buy “fprums” i meant “irc..”… you all know how it is LOL haha i foudn it… […]

I must not fear. Fear is the mind-killer. Fear is the little-death that brings total obliteration. I will face my fear. I will permit it to pass over me and through me. And when it has gone past I will turn the inner eye to see its path. Where the fear has gone there will […]

as much fun as it was to beat dillinger senseless at q3a while he could not hear me sneaking around the various arenas, i am as much to blame as he for forgetting this simple step. updating the drivers for my sblive value (i know, not the coolass gold pressed latinum version that also makes […] 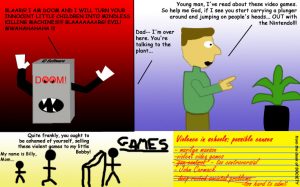 ummm… yeah. you may be wondering about today’s medley of images i’m calling a “comic”. well.. go here i suppose and then you may get an inkiling of where i’m coming from. but after going there (where you will read about the attack of media and video games (specifically john carmack himself) as the cause […]

dear prae: you must do work to have work to show. signed, your brain. dear brain: shut the fuck up or i’ll stab you with a q-tip. signed, prae. today’s comic illustrates the beauty of unions. ahh… fuck you work. what’re you gonna do? what are you gonna do? the little dialogue with my brain […]

#64: the preferred grammatical form is “making an ass of yourself”

wow it’s mornign and i’m fucking tired… so yup i gots me a shiny copy of black and white. i really can’t describe it any better than tycho from penny arcade did on friday, so go check it out. i love this game. :o) i had to watch popstars last night- many thanks to corrine- […] 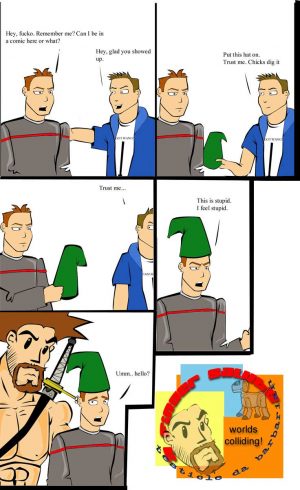 well here i am, back. sort of. this is going to be quite the ranted, disconcerted news update. just so you know. in fact, i think right now i’m gonna go get some food, then come back to it. okay so i’m a fucking liar. sue me. what you see above you is not only […]

wow… here i was, quite ready to write his big report on my purple-haired adventures, along with the news that i mentioned on saturday that indeed, black and white has gone gold. but it would seem my eyes will not stay open and as such i really, truly, terribly must go. the comic probably doesn’t […]