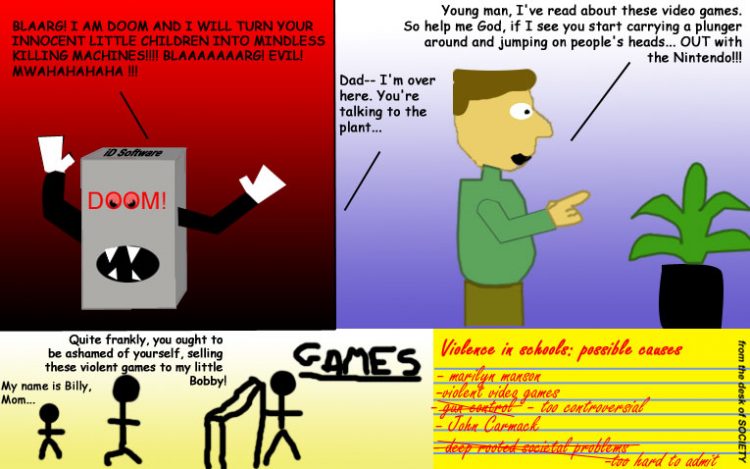 you may be wondering about today’s medley of images i’m calling a “comic”. well.. go here i suppose and then you may get an inkiling of where i’m coming from. but after going there (where you will read about the attack of media and video games (specifically john carmack himself) as the cause of the columbine shooting), be sure to go here, here, and here to read about the death education classes taught at the schools. also, be sure to read this:

the television is not a babysitter. rules are made to be rules, limits and boundaries to be enforced. reality is very real, and video games are very not. the tv and the computer are not parents. you have a child and you have a responsibility to that child, to that mind, to raise it and instill within it values and morals and a sense of right and wrong. you do not get to blame the media, because if you had the time to be parenting you would educate your children and they would understand the difference between reality and fantasy, between right and wrong. there are no easy answers. there is no quick fix. the issue of youth violence is very real, and it runs deep. it is multifaceted and is indicitive of a very real, very large problem within our society. let’s start to deal with it instead of trying to find someone to point fingers at.

there’s a thread in the forums somewheres about it as well, but the forums (as of right now) aren’t working still, while ezboard shifts locations.. *sigh*. such is life.

while it may be a long time since i’ve slept, and i wouldn’t exactly call this a political caroon or any good but .. ah what the fuck

do you (yes, you!) ever lie awake at night, wondering just how to go about having sex with a dolphin? well, have i got a website for you!

i’d just like to say that hopefully, some things around the site here will be undergoing some minor changes and tweaks in the near future… primarily, i’d like to get ahead on comic production, as well as go back through the archives and reduce some file sizes. every now and then i entertain the thought of 3fs version 2.0, but balk at the work involved, despite having a pretty reasonable picture in my head what a whole new site would look like… but i know that that is talking crazy talk right now.

kier of testicle da barbarian has lived his last day on high-speed internet access for what could be quite some time. let us share in this moment of silence… now let us laugh mightily.

i have a couple more links for ya’ll but i’m saving them for a rainy day… or friday, you know, whatever.

it’s strange.. but i can’t seem to remember anything i was going to put here today. i will go out on a limb and say this- as i get further into black and white, the game’s quirks begin to annoy me more and i’m wondering if i’m feeling let down by peter molyneux’s much-hyped product. i think i am. it’s sad, really… what do i do now but go out and buy tribes 2? it’s just that as one progresses further into the game, everything takes longer. a lot longer. saves, loading the game, everything. the performance bogs down. my creature won’t poop. and, truly, the novelty begins to wear off… of course, as soon as i get back into things, i’m in love with the game again. but it only takes one stupid autosave to turn me right off- the game’s shortcomings seem to overpower the many highlights. it’s really quite sad in that regard. maybe a patch will change my tune.

you guys have not been voting for me at funnypages! i know! i can tell!

anyone else have fan art? acause there now a fan art section in the funstuff page!!!