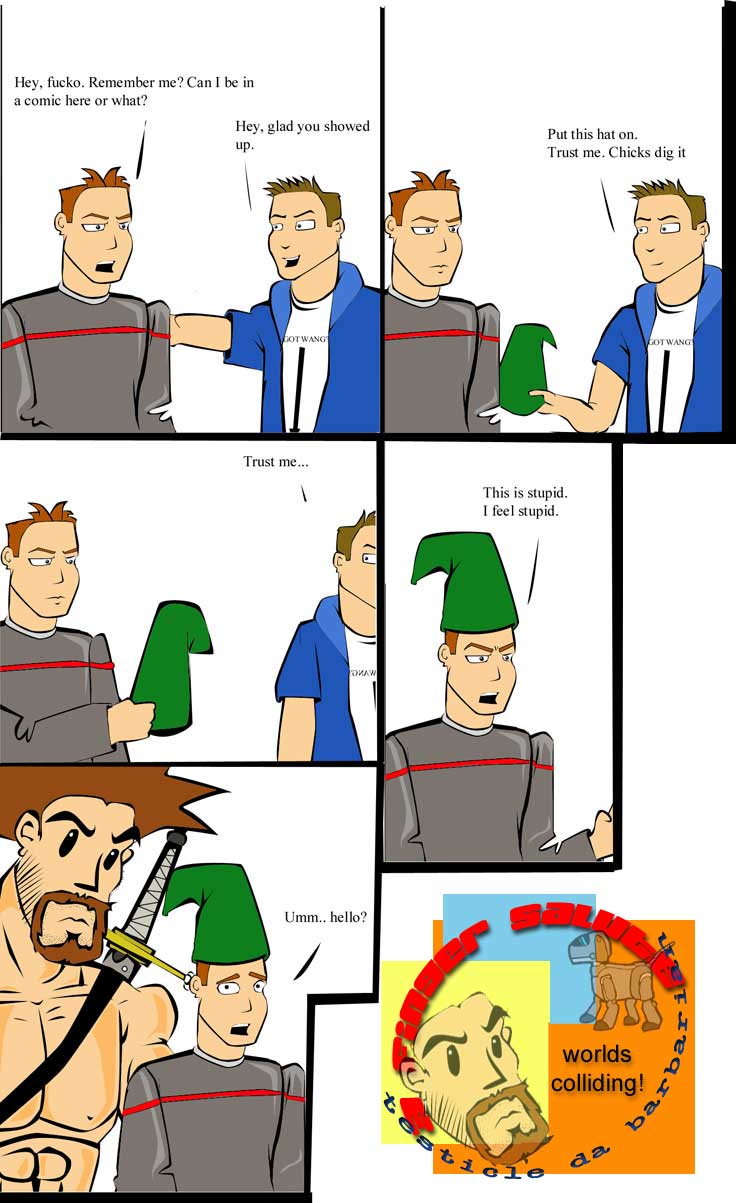 well here i am, back. sort of. this is going to be quite the ranted, disconcerted news update. just so you know.

in fact, i think right now i’m gonna go get some food, then come back to it.

okay so i’m a fucking liar. sue me.

what you see above you is not only the second-largest comic ever posted here at 3fs, it is the work of one vey sexai kier broadfoot. kier, now the sole proprieter of testicle the barbarian following a stunning coup d’etat earlier this month, in which he overthrew longtime webmaster and general slackamuffin koba and imposed himself as a despot ruler of the angelfire domain- despite little to no actual knowledge of html- slaved long and hard in photoshop to bring you this and i think it’s great. super, really. and if you don’t, you know, get it, you should go through his archives. if you simply aren’t getting it, you should probably just wait for the picture to load. it’s a biggie, but worth it. oh yeah- and i did the very colorful “worlds colliding!” spot at the bottom. colorful, wouldn’t you say? why at the bottom? cause we’re fucking crazy mofos like that. that, and that’s the space he left me. i’ll leave it up to you kind folks to guess what would have happened were there one more frame here… heh heh heh.

john’s a good sport, we love him. and by john, i of course mean dillinger- get used to it, from now on dillinger’s short form will be “john”, in reference of course to the supposed-eighteen-inch-schlong-weilding former-public-enemy-numba-one that he draws his namesake from… why you ask? i really just don’t like the sound of “dill”. it’s the problem with three-syllable names.. they’re harder to shorten. you can’t very well call marauder “maur” or whatnot.. with praetorian you can get away with “prae”- i like “prae” and often use it myself… but now i’m rambling.

so i had big plans for this newspost, but i feel my strength fading quickly. first, on to some linkage:

in wang-related news:
swinging wang
that is a lot to pay for wang
everyone’s least favourite method of birth control

i’m pretty sure that most or all of those three links are from penny arcade.. but you know, if you don’t read it (ahahah yeah right) well there you go. i had some more wang-related news to share, but it would seem that that would require more of an effort than i am currently willing to lend to the project.. maybe on friday, if you’re all good.

need a fast computer? how about one that’s just modelled after something that goes fast? while i can’t vouch for the reliability of these systems, they do seem to pack quite the wallop into four wheels and a nascar chassis.

remember when i mentioned that ridiculous icq ad? corrine tells me she clicked on one for a contest,and it was only open to residents of malyasia. malyasia, for christ’s sake. earth to icq: you are dumb fuckers. at least target your ads. you have most of our locales and languages. use that knowledge.

i don’t know if you know much about efront, if not i’m not going to get into it. suffice it to say, they long ago earned the repuation as motherfuckers, usually because they weren’t really paying people who were part of their network, not obligating contracts, and because icq logs of the president scheming to rip clients off were released to the web. if this is true, they are finally getting some just desserts.

on a much sadder and, truly, serious note- what has long been feared in afghanistan appears to have finally come true. the taleban government has destroyed the world’s oldest and largest statues of buddha, out of concerns of idol worship. outcry and pleading from around the world could not dissuade this catastrophe, and now a beautiful, mysterious, and awesome link to and vision of our past is gone.

more on friday with the linkage and such.

i finally beat oni- and not a moment too soon, since it would appear that black and white will be in my grubby hands on friday. i’ll spare you the tedium of my usual crazy-ass rants about the game, and instead tell you that i am very, very, very very excited about this game. i would almost say titillated, just because it’s a good word. but back to oni: if anyone out there finished level 14 of oni, from the part where you smash the truck through the gates to the part where you confront muro in less than a zillion tries, i salute you. like, fuck man. finally, i got my l33t on and whooped a fairly tremendous amount of ass, in both the you didn’t even see or hear me but not i just kicked you three times in the goddamned head kind of way, and in the you were standing there waiting for me cause you’re a lame-o campy computer ai fuck and you keep using the same goddamned cheapo unblockable move on me but i’m still to quick and i’m still kicking you three times in the goddamned head way. and then beat muro on my first attempt. damn i’m good. now, i enjoyed the game- i did play it all the way through, despite one or two near-impossible fucking situations to deal with (i had to cheat to beat the end of level 13) and the mindless repetetiveness of the game, as illustrated in my version of the source code for oni:

however, the combat engine is just that cool that i could stay interested. the maps were very well designed, despte being pretty much empty and just big rooms with generic objects in every single building. my favourite gun was, without a doubt, the standard issue handgun. a close second to that would be the mecury sliver gun, because it looks cool, it sounds cool, it’s fun to shoot, the shot looks cool, and it’s *too* much fun to play with snipers, running and dodging at the last second. bonus points if you can make them shoot their own comrades. the automatic in game save system sucked ass, leaving me high and dry every single chance it got. the story was quite cool.. up until a point. that point, i’m assuming, is when bungie stopped working on the game and gathering of developers took over, and hacked together the rest of the game in quite a macabre fashion in order to get it out the door. the ending was… not enough. too short, and didn’t really *do* enough for me, much like the intro.

oh, and here’s my only advice: when (if?) you beat the boss of chapter 13, and you have to make a tough choice: don’t fucking shoot. i really wanted to, but i didn’t, and by the end of the game i was like goddamn! i’m glad i didn’t shoot.

wow so between that massively large comic and my ranting, if this page loaded for you before the next solar eclipse, i’m impressed. i warned you this would be a massive update- try to enjoy it. don’t fight it. you know you want it.